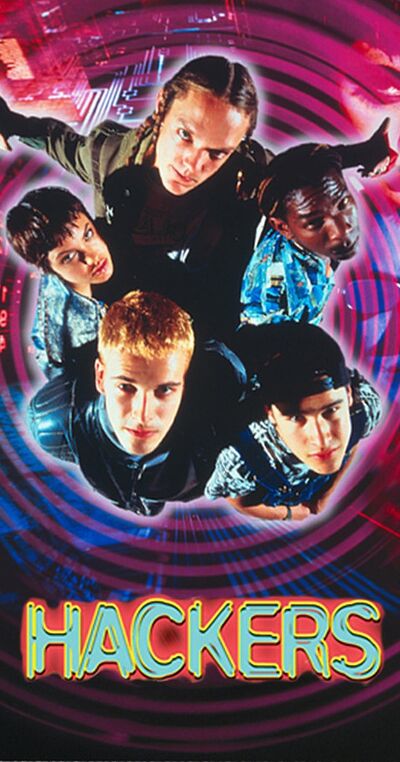 "Cereal Killer, Phantom Phreak, Crash Override...if these handles appear on your computer screen, you're beyond saving—consider yourself hacked."

In 1988, 11 year old Dade "Zero Cool" Murphy was arrested by the Secret Service for creating a computer virus the caused a seven-point drop in the New York Stock Exchange. Sentenced to seven years without a computer or a touch-tone phone, Dade uses the computer he receives on his eighteenth birthday to get back into the game.

Using the new alias "Crash Override," Dade competes with and befriends fellow hackers "Lord Nikon," "The Phantom Phreak," "Cereal Killer," and Kate "Acid Burn" Libby. In an attempt to prove himself to the group, aspiring hacker Joey Pardella downloads a fragmented file from "The Gibson," the supercomputer at Ellingson Mineral Company.

The file is part of a worm that computer genius and rival hacker "The Plague" inserted in The Gibson in order to defraud Ellingson, so The Plague hatches a plan to hide his crimes and make the group take the fall in his place. Dade, Kate, and the rest of the hackers find themselves in a race against time to outrun the Secret Service and unearth the evidence needed to bring the true criminal to justice.

Retrieved from "https://hackers.fandom.com/wiki/The_Movie?oldid=3953"
Community content is available under CC-BY-SA unless otherwise noted.